Join us this Sunday for one OUTDOOR service at 10:30am! Masks are optional while outside for this service. We will also be livestreaming on our Facebook page.

He Knows What is in the Darkness | Daniel 2

He Knows What is in the Darkness | Daniel 2

Sermon Title- He Knows What is in the Darkness

Sermon Summary- In the midst of your free-fall God presents himself in Christ as your superior wisdom and government.

Verses and quotes for the Screen (I know it's a lot...I'm going for the olympic record!) :
2:1.In the second year of the reign of Nebuchadnezzar, Nebuchadnezzar had dreams; his spirit was troubled, and his sleep left him.

2 Then the king commanded that the magicians, the enchanters, the sorcerers, and the Chaldeans be summoned to tell the king his dreams.

2: 17 Then Daniel went to his house and made the matter known to Hananiah, Mishael, and Azariah, his companions, 18 and told them to seek mercy from the God of heaven concerning this mystery, so that Daniel and his companions might not be destroyed with the rest of the wise men of Babylon.

2; 20. “Blessed be the name of God forever and ever, to whom belong wisdom and might. 21 He changes times and seasons; he removes kings and sets up kings; he gives wisdom to the wise and knowledge to those who have understanding; he reveals deep and hidden things; he knows what is in the darkness, and the light dwells with him. 23 To you, O God of my fathers, I give thanks and praise, for you have given me wisdom and might, and have now made known to me what we asked of you, for you have made known to us the king's matter.”

2: 27 “No wise men, enchanters, magicians, or astrologers can show to the king the mystery that the king has asked, 28 but there is a God in heaven who reveals mysteries, and he has made known to King Nebuchadnezzar what will be in the latter days.

wisdom as the ability to see reality as God does, enabling people to apply knowledge in a life that pleases the Creator and creates godly abundance. We are told in Colossians 2:3 that everything we need to know about the Father and how to properly interpret reality and live to His glory is accessible to all believers in His Son. Matthew Henry comments, “The treasures of wisdom are hidden not from us, but for us, in Christ.”

It is when we look long at Jesus Christ and him crucified that we understand what it means to call him Messiah, Israel’s true King, great David’s greater son, the one who described himself as ‘a greater than Solomon’… It is when we stand at the foot of the cross that we discover the true identity of Lady Wisdom, calling to the simple to turn aside and enter, to eat her bread and drink her wine. The Messiah is the ultimate interpreter, of God to the world and the world to God, of God to ourselves and ourselves to God, indeed of ourselves to ourselves… It is in him that we are rooted and grounded, that we find …the soil that nourishes us and makes us what we are. And, particularly, it is in him that the dark theme of suffering comes to full expression. Part of the point of the book of Job is that we don’t understand, and never will in this life, how all of that (suffering) makes sense. But part of the point of Paul’s gospel of the crucified Messiah is that this unfathomable act of love is where that sense is to be found. And even the folly of Solomon comes into focus at this point; because part of God’s wager in the Old Testament is that he chooses to act in and through the people of Israel, knowing that because they, too, are composed of sinful human beings they will get it wrong, and that he will come himself, in the person of his own Son, the true king, the man after his own heart, to take upon himself the long-term results of Israel’s royal folly as well as the long-term outworking of Israel’s royal wisdom. We find in the ancient biblical record itself the same ‘problem of evil’ that we observe in the created order; but as we do so we discover that it, too, is held firmly within the mystery of Christ and him crucified. To quote the hymn- Praise to the Holiest in the Height--‘O loving wisdom of our God, when all was sin and shame,// a second Adam to the fight and to the rescue came.’ Loving wisdom; another name for our beloved Jesus.

31 “You saw, O king, and behold, a great image. This image, mighty and of exceeding brightness, stood before you, and its appearance was frightening.32 The head of this image was of fine gold, its chest and arms of silver, its middle and thighs of bronze, 33 its legs of iron, its feet partly of iron and partly of clay.34 As you looked, a stone was cut out by no human hand, and it struck the image on its feet of iron and clay, and broke them in pieces. 35 Then the iron, the clay, the bronze, the silver, and the gold, all together were broken in pieces, and became like the chaff of the summer threshing floors; and the wind carried them away, so that not a trace of them could be found. But the stone that struck the image became a great mountain and filled the whole earth.”

2: 38- you are the head of gold. 39 Another kingdom inferior to you shall arise after you, and yet a third kingdom of bronze, which shall rule over all the earth. 40 And there shall be a fourth kingdom, strong as iron, because iron breaks to pieces and shatters all things. And like iron that crushes, it shall break and crush all these. 41 And as you saw the feet and toes, partly of potter's clay and partly of iron, it shall be a divided kingdom, but some of thefirmness of iron shall be in it, just as you saw iron mixed with the soft clay. 42 And as the toes of the feet were partly iron and partly clay, so the kingdom shall be partly strong and partly brittle. 43 As you saw the iron mixed with soft clay, so they will mix with one another in marriage, but they will not hold together, just as iron does not mix with clay.

44 And in the days of those kings the God of heaven will set up a kingdom that shall never be destroyed, nor shall the kingdom be left to another people. It shall break in pieces all these kingdoms and bring them to an end, and it shall stand forever, 45 just as you saw that a stone was cut from a mountain by no human hand, and that it broke in pieces the iron, the bronze, the clay, the silver, and the gold. A great God has made known to the king what shall be after this. The dream is certain, and its interpretation sure.”

Luke 20:9-18 “A man planted a vineyard and let it out to tenants and went into another country for a long while. 10 When the time came, he sent a servant to the tenants, so that they would give him some of the fruit of the vineyard. But the tenants beat him and sent him away empty-handed.11 And he sent another servant. But they also beat and treated him shamefully, and sent him away empty-handed. 12 And he sent yet a third. This one also they wounded and cast out. 13 Then the owner of the vineyard said, ‘What shall I do? I will send my beloved son; perhaps they will respect him.’ 14 But when the tenants saw him, they said to themselves, ‘This is the heir. Let us kill him, so that the inheritance may be ours.’ 15 And they threw him out of the vineyard and killed him. What then will the owner of the vineyard do to them? 16 He will come and destroy those tenants and give the vineyard to others.”

When they heard this, they said, “Surely not!” 17 But he looked directly at them and said, “What then is this that is written: “‘The stone that the builders rejected has become the cornerstone’? 18 Everyone who falls on that stone will be broken to pieces, and when it falls on anyone, it will crush him.” 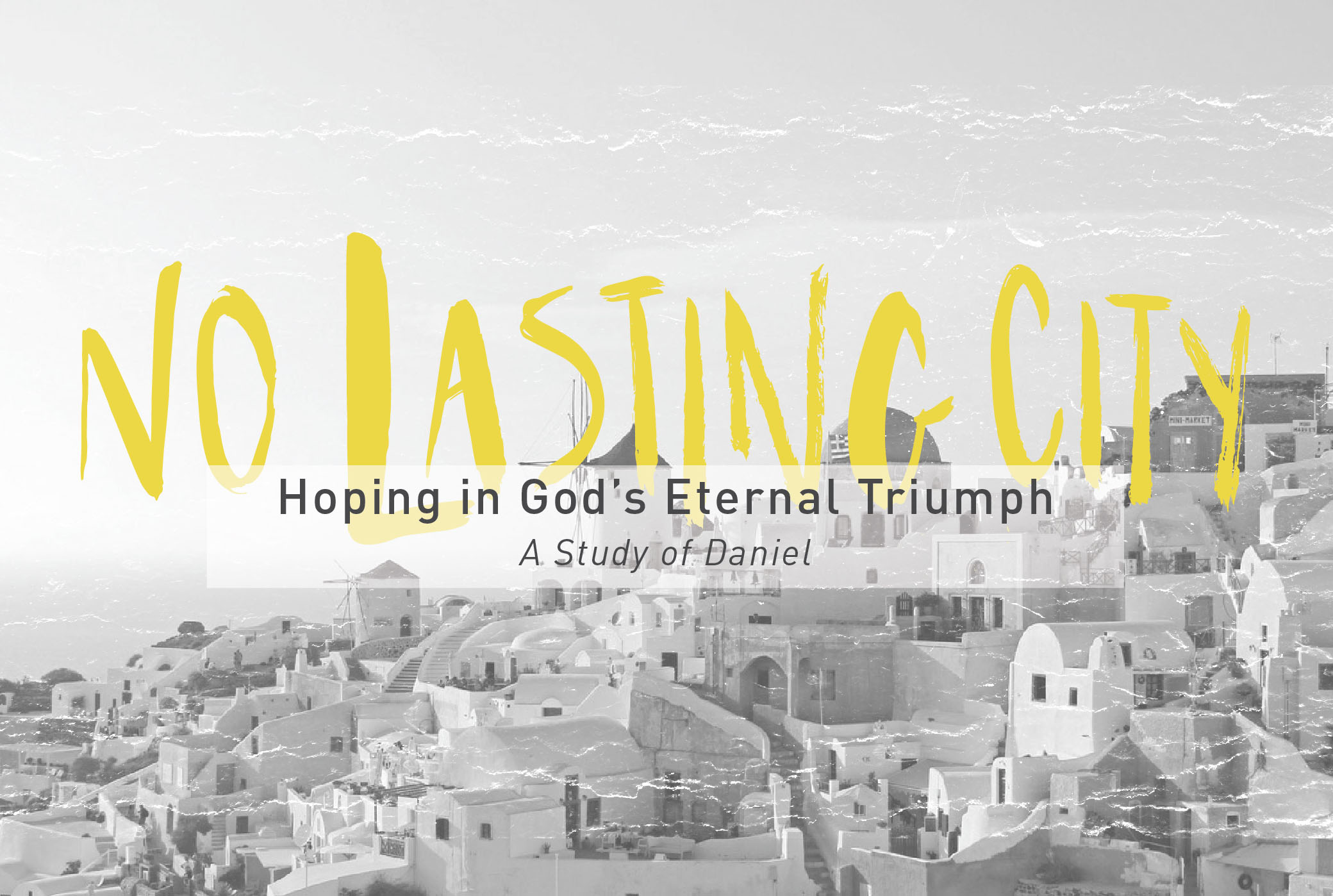 More in No Lasting City: Hoping in God's Eternal Triumph

Daniel and the Lion's Den

Read the Handwriting on the Wall (literally)

Sing to the True King